In September of 2014, founder RJ Sampson was reading Reddit posts in the OculusVR sub-Reddit (this was where he kept up to date on the latest release of Oculus hardware, software and to see what other folks are doing with virtual reality). He came across a post from a man who was thanking the folks at Oculus and the developers of a virtual reality game demo. 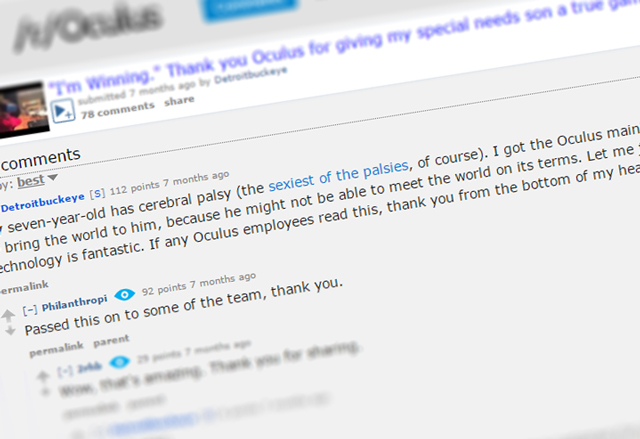 "My seven-year-old has cerebral palsy (the sexiest of the palsies, of course). I got the Oculus mainly for him. I wanted to bring the world to him, because he might not be able to meet the world on its terms. Let me just say that this technology is fantastic. If any Oculus employees read this, thank you from the bottom of my heart. … It kills me when my boy wants desperately to play Xbox like his brother and sometimes cannot (due to his dystonia). This tech is so truly immersive, and so damn fun, that I'm just thankful to the creators of the Rift, and also the third-party devs making apps in their basements with no compensation."

The man also posted a video of his son playing the game demo. His son was so excited and happy, and towards the end of the video he said, "I’m winning!" It touched RJ deeply. He wondered, how often does this boy in the wheelchair, who couldn't even hold an Xbox game controller in his hands, get to shout "I’m winning!" and truly mean it, feel it and smile? To the father of this child, seeing and sharing his son's excitement was overwhelming. RJ thought about his four boys; if any one of them were in this situation, he would do everything in his power to make sure they could experience the therapeutic power of virtual reality.

RJ knew at that moment, this is what he needed to do. He was going create virtual experiences tailored to kids with special needs. He worked to find ways to make these experiences fun and therapeutic. Virtual reality was immersive; the more he learned about how these experiences can provide therapeutic benefit, the more it drove his passion to create VR Kids.